We would like to give a HUGE shout out to the Boston Logan International Airport team for an outstanding transition this week. They are an awesome group who
have their work down to a science and work very well together. Jeff said it was the craziest day of his life with the 33 RONs that were completed. Thank you to Jeff,
his leadership team, and the whole BOS crew for an outstanding job!!! 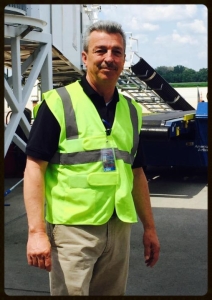 We would like to highlight Rob Blacksher in our Summer ’15 newsletter. Rob has been with Jetstream over 4 years and has worked in our
CLT, DEN, BDL, and CMH locations.

Rob was chosen by Joe Gutierrez because he has put in a lot of time and effort in helping turn around our BDL station.  Joe said, “A few months ago I asked
Rob for his assistance in helping turn around a struggling BDL station.  Without hesitation, Rob accepted the challenge and reported to BDL where began to forge
relationships with our employees and customer.  He made an immediate impact and his leadership has really stabilized the station that is now a top performer.
Rob has sacrificed his time away from home, spending long hours on the job and
has had to constantly deal with me:)”
Rob began his airline career in 1997 as a ramp agent in Albuquerque, NM working for DGS. In 1999, he began his management career in Little Rock, AR managing a
Delta contract for 2 years. In 2001, he was selected to manage the first joint venture between DGS and Continental in TPA that ultimately led to partnering in 3 other cities.
Rob’s next stop was LAS where he had oversightof 4 different carriers, DL, WN, AS, and VX. In 2008, Rob was moved to SEA and had oversight of SEA, LAS, and ANC
until 2010 when he left the company.
He then joined our Jetstream family a year later.
Rob mentioned that his most memorable experience in the airline industry was the morning of September 11, 2001 when planes were forced to land across the country in airports they weren’t scheduled to be in with no notice at all. He says he hopes to never experience a day like that again, but what he does remember the most was how inspiring it was to see our
country come together when things were so chaotic. It’s the same spirit that Rob tries to instill in those he works with every day.  Thank you Rob for all you do!
-->

Allegiant to grow its Airbus fleet to 50 aircraft.

JetStream Ground Services, Inc. is actively recruiting for Ramp Agents, Aircraft Cleaners, Cargo Agents, Customer Service Agents, High Lift Truck Drivers, Lavatory and Water Drivers, and Operations Agents for all locations. To submit your resume for consideration, please list your preferred city and job position in the subject line. All resumes can be emailed to jetstreamhr@jetstreamgs.com or faxed to 561-746-3151.